Tour through the Schlo&szlig-Hotel Hirschau 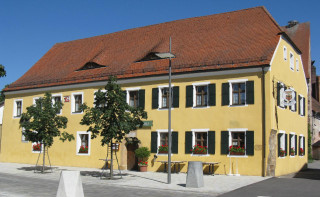 For the arriving guest provides first view of the castle following hotels. The building was originally the toll house of one of the city gates of Hirschau. Early 19th Century it was rebuilt as part of the construction of the Schlo&szligbrauerei brewery in the behind lying buildings. This Schloßgaststätte shows nearly unmodified for now 200 years.
During the construction of the new Schloß-Hotel in 1987 that old building was completely renovated and equipped with modern hotel rooms. 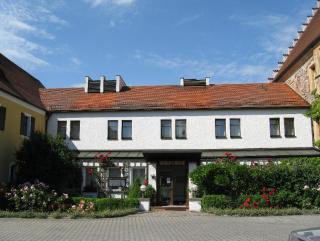 When the guest puts his car on the car-park, this is the view of the newly built wing of the hotel with terrace in front.
On this spot the brewhouse and the storage cellar of the old brewery were located.

In this picture you can see the entrance hall with reception and its historic vaults in the building of the old guesthouse. 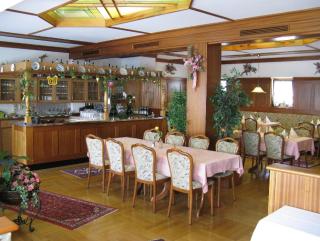 For feeding the guest can choose between the elegant restaurant and the rustic parlor - or, during summertime, our cozy beer garden. 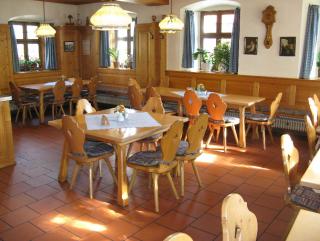 For family reunions or other groups, the 500 year old castle cellar a unique atmosphere for miles around. Here for almost 200 years beer was fermented and stored. The vault probably dates from the 12th or 13 Century and was part of the old castle building which burnt down in 1474. The cellar offers depending on the seating capacity for groups with up to 60 people. But smaller groups feel very comfortable here, too. 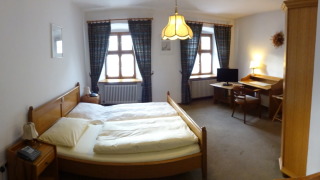 The hotel has 12 rooms with 21 beds. Each of them is of course with a bath or shower, cable television, digital telephone and clock radio. Six of the rooms are housed in the building of the old Schloßgaststätte, while the other rooms can be placed in new tract.

Want to see more pictures from the Schlo&szlig-Hotel?